You are here: Home » News and Events » Industry News » What is the development history of the High pressure Oxygen Compressor?

What is the development history of the High pressure Oxygen Compressor?

The first centrifugal oxygen compressor used in industry appeared with the early gas turbine in the 20th century. In the early stage of centrifugal oxygen compressor development, the design level is limited by the manufacturing method at that time. Equipment manufacturers had to use a limited number of methods in their designs, including machining, jointing and casting. Therefore, the impeller of early centrifugal oxygen compressor is mainly cast or riveted. Some of the earliest riveted impellers date back to the 1920s. In the mid-1940s, Myklestad developed a new uncoupled bending vibration calculation method for aircraft wings and other beam structures. - A year later, Prohl developed a general method for calculating the critical speed of a flexible rotor. The two forms the basis of myklested-Phohl method, which is a conversion matrix scheme for undamped critical speed map analysis widely used today. Just as aerodynamics experts begin to analyze the design of a new impeller using the -dimensional method, rotor dynamics analysis USES the undamped critical speed map to determine the natural frequency of the rotor of the bearing support system. The undamped critical speed calculation program generates the undamped periodic synchronous critical speed through the input rotor geometry and according to the symmetric bearing stiffness coefficient. From the 1940s to the 1960s, the first critical speed (NC1) was calculated by hand and kept out of the compressor's speed range. With the rapid development of computer technology and the deep understanding of radial bearing coefficient, bearing coefficient can be accurately taken into account in the undamped critical speed diagram, so as to correct the position of critical speed to meet the requirements of unit operation. Great progress has been made in the design and manufacture of centrifugal compressors, many of which are due to the change of analytical tools used in the design phase. If the designer's achievements can not be transformed into qualified products, it is useless to use any more accurate analysis method. Therefore, the improvement of centrifugal compressor performance is absolutely inseparable from the progress of manufacturing methods. 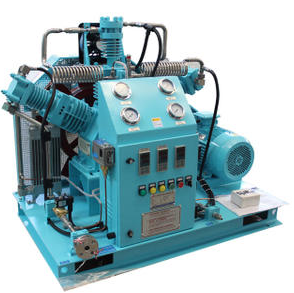 Scroll compressor is a new type of positive displacement compressor, which has the characteristics of compact structure, high efficiency, high reliability and low noise, especially for frequency conversion control operation. However, due to the lack of numerical control processing technology and lack of a proper solution to the problem of axial force balance, it has not been completed for a long time. In the early 1970s, due to the intensification of the energy crisis and the emergence of high-precision CNC milling machines, the development of vortex machinery has brought opportunities! In 1973, the American A.D.L company completed the fruitful research, and first solved the sealing technology of eddy disc end wear compensation. On this basis, the prototype of scroll compressor with various working materials was developed in cooperation with Switzerland. The research report of the scroll nitrogen compressor is presented for the first time, and it is proved that the scroll compressor has incomparable advantages over other compressors, so the large-scale engineering development and development of scroll compressor have embarked on the road of rapid development.

It took a long time for the high-pressure oxygen compressor to have its current working efficiency.